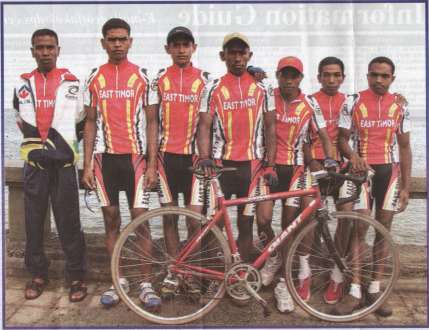 This is the East Timorese cycling team that’ll be off to the Olympics this year. If they come up against australia I think I’ll barrack for the E.T.s because of the continued bully-boy tactics this country is on with — as if the 14 years of dirty deals with Indonesia, before independence wasn’t enough.

I got the clipping from ex-girlfriend jean, who returned to town briefly for educational commitments. She showed some of the villagers this entry back (with the Cherry Guevara icecream wrapper) and they didn’t like at all. It made them angry. That’s the difference – fighting for freedom is a real thing there and not much more than an abstract concept here — we decide to stay home and make it a Blockbuster evening — every evenning, as freedom erodes.

But hey! if they didn’t like that then I sure wouldn’t want to be standing too close when they find out about the pitch I had accepted – the (banana flavoured) Xanana Split Icecream Sunday with GusmaoBerry Topping. It comes in a little plastic cup.

Speaking of the evil icecream conspiracy

I bought an eskimo pie the other day just for the hell of it, and as you can imagine, was horribly diappointed. It’s just a whack of vanilla icecream in crappy chocolate. Where’d the damn busicuit go? Two dollars?! .. get outta here…