That would be my n.american indian name if they were to give me one, because I seem to be doing an awful lot of that lately; walking eating a pizza. But who in their right mind could go past Monday Madness half-price night. $3.75 for a large pizza – that’s obscene. Pizza cutters have always been the mercenaries of the eats business. I didn’t need any ‘the pizza’ tvshow to work that out — I figured it out way back when Tower Pizza was at it’s height. It should’ve been called Dark Tower Pizza. Not in an ‘I’m whinging about this’ kind of way – but they were just evil. The last time I was near there there was dead leaves and scrap paper and wind-blown garbage around their door — the Tower now lies dormant, waiting for a new evil master.
And so Pizza Lovers of the monday madness was rather busy. Another of those things I wish I had the attitude for is to say a different name when the ask for a name — like blockhead or Potsy. It was very Happy Days there. I saw a guy wearing my 4WD slippers. A couple of weeks back there was an old Miss Marple-ish type sitting next to me waiting and via my mindblowingly brilliant peripheral vision I could see that she was doing something with a pen and paper and that her eyes were flicking up and down between the paper and _____? As I got up I managed one quick look at her paper and I think whe was sketching my profile – but frankly mr.squiggle could’ve done a better job.

Speaking of keyboard players, I was reading Monolake‘s website and he mentions Jean-Michel Jarre as being an influence. That name was familiar – I pass by a couple of his CDs at the library every week but hadn’t picked them up on account of them looking skanky and old. I listened to a collected hits type thing. One sounded familiar – from Chariots of Fire or something like that, and I can tell that he was probably a bit of an influence on some of the earlier techno people like Speedy J. Synthesizer music is kind of like computers in films though — it doesn’t take long for it (them) to date.

I aren’t no graphical designer, but I could still really dig this Patron Saints of Graphic Design – what I saw a link Dabs from adland put up. Especially St.Concepta I could relate to.

This is an interesting spin on participatory music nights – NoWax where you bring along yourfave tracks on mp3 and have a little dj comp. 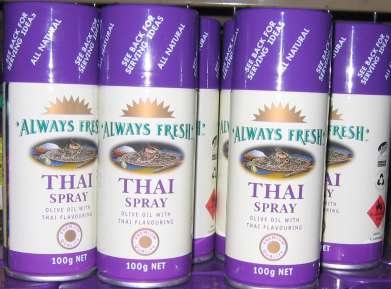 Here’s the latest wacky offering at NQR – ‘Thai Spray’ — not only does it rhyme with fly spray, but the sweeping statement of the day is, “Nuffing good ever came out of a Spraycan” – except maybe spraypaint but only when it’s got lots of colours and is pretty, and I’m not around to inhale the toxic fumes. Fly spray, that stuff people put on baking trays, de-odourant with aluminium in, “air freshener”, WD40. I don’t need any of that junk.