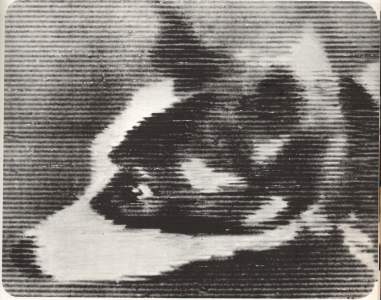 The dog, Strelka, companion of Belka aboard Sputnik V, appears in profile in this television close-up transmitted from orbit. Two television cameras, operating on signals from the ground showed the animals’ reactions to launching, acceleration and weightlessness. Strelka later had a litter of six healthy puppies, one of which was sent as a present to John f. Kennedy with the not attached, “Suck Eggs”.