Ug. now my stats counter thing isn’t working. I look at that thing all the time. I feel lost. Maybe it’s for the best.

Two things I saw at D/blog:

Noam ‘Chompers’ Chomsky has a weblog!

Also, this has to be one of the coolest sites I’ve seen ever — the official ninja webpage.

“My friend Mark said that he saw a ninja totally uppercut some kid just because the kid opened a window.” — I love it. 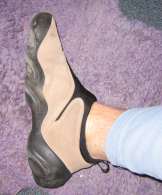 The other week at the op-shop I also got these unbelievably hideous shoes, but the were only four fiddy, so what are ya gonna do?

I was thinking of the future. Winter is coming. I’ll wear these as all-terrain slipppers around the backyard. I used to just wear loafers, and when I accidentally didn’t see a snail or slug and stood on it, I’d think ‘sorry snail’.

But not any more. I don’t care what I stand on.

The extra rubber on the soles puts me in a higher, more commanding position. The old shoes left me feeling vulnerable. When somone stood beside me I couldn’t see over them and I was fearful of what might’ve been approaching from the other side. I know they use twice as much rubber as any other kind of shoe, but me and my family deserve it. Everybody else had them, so I decided that I needed them too.

In most situations of daily life I am left feeling powerless and impotent. But not when I’m wearing these babies. I stomp around like I own the joint.

That thing that got eaten yesterday – I was saying that the warehouses in my head are filling up with stuff from the institution and if there was any illusion of planning or effort that went into what went here, then it’ll probably drop off even more. I was thinking I had these essays to write, but then today I realised I have two weeks of solid procarastination to get though.

So I was roaming around the streets aimlessly at lunchtime and noticed a church op-shop open. They’re like those flowers that only open up on full moons — in that they aren’t open much. Sometimes they can have some good stuff. I found a book, The World’s Greatest Alien Abductions — impressive sounding, but I’m not that easily swayed. I did the flip-test, flip to a random page and read. I got the subheading, “The sexy spacenapper”. Sold!