Jump in the time-machine and let’s do some serious shoe-inspection. A big page of Slowdive tracks. If you like music where they play one chord, then change to another chord, then go back to the first, then back to the second — all buried under layer upon layer of effects-pedals (great because no one can tell when you hit a bum note). If you don’t mind a bit of distant, non-specific moaning in place of normal singing. Then this is the music for you!

Don’t mind it meself. Reminds me of being 16.

– The Bureau of Extreme Ironing 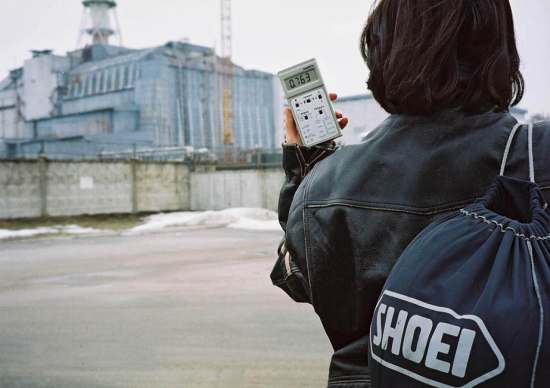 – A Ukrainian biker woman rides through the Chernobyl area deadzone and takes a bunch of fascinating pictures — which I saw the link to at slashdot.

A thing about English indie-pop is actually part of my grand unified theory — being that the prevalence for long monotonous sounds (both vocal and instrumental) are due to ancient druidic influence on the anglo mindset.

Besides Slowdive, Ride were another good example. If you take an LP and switch it down to 16 RPMs you can get one note to last for up to a minute.

I went to the monster fete in south geelong today. It was okay, although I do take exception to this bourgeois ‘smashing shit’ trend that’s picked up.

A while back I saw a short news bit about some big cub-scout jambouree and one of the activities was throwing rocks at glass, ceramics and other breakables.

It was happening today too. People pay money, get given a few cricket balls and the opportunity to smash plates etc.