The supermarket cleaning job didn’t work out. Probably the less said about it the better – it’s left me feeling a bit flat.

But onward and upward, right?
Yesterday I noticed that ThinkFree, a relative newcomer on the office suite scene, had released for Linux. They’ve had windows and Mac versions available for a while. It requires registering and it’s a 30 day trial version.
Initially I thought a 20meg download plus javaruntime 1.4.1 (another 20mb) was a bit hefty but in comparrison to OpenOffice it’s still light. I remember this was one of their aims – I think they are/have done a really small version to be used on PDAs which hooks in with the desktop version.
The trial comes with the use of a 20Mb ‘cyberdrive’ ; space on thinkfree’s central server. The idea is that you can work on yer documents where ever – provided you’ve a net connection.

The actual word writing app. isn’t too bad. It seemed a tad sluggish – I don’t know how much (if any) use it makes of Linux machinery. It could well be just a straight port – like what IBM did with the Websphere homepage HTML authoring program.
It started spell-checking in English-British straight from the get-go, which was a pleasant surprise. It can save into MS .doc, .htm, .rtf, plain text and .wrf — which perhaps is their native format … i don’t know – I haven’t seen it before.
It doesn’t have footnotes (which is no good for me) but comes up all anti-aliased with a choice of just a few Linux typefaces.
The suite also includes a spreadsheet app. and something named ‘ThinkFree Show’, which I’m assuming is a power-point-like thing. There’s also a file manager, but I don’t know why.
They say it’ll work on Red Hat 7.2 or later, and don’t promise it will with anything else, but with the 1.4.1 Jave installed – i got it going on Mandrake 9 no problems.
The funniest thing about it (there had to be something) is its splashscreen. Sure, it’s depicting a Suit looking free, but that side-on shot of the laptop – when i’m not looking at it directly – looks like a skyscraper, and the dude is swan-diving out a window of it. 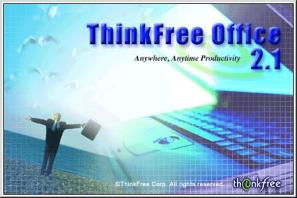 Oh yeah – it’s priced at roughly 100 clams australian – much cheaper than MS Office, but nowhere near as cheap as OpenOffice.

I know geelong was a weird place, but this only proves its…

Jay, yeah – it’s not the default, that’s for sure – there’s a little app. here at sourceforge which you install then it pulls through the other dictionary files like UK english. They even have latin although I’ve never needed it.
Edit Comment / Delete Comment Block IP 203.29.131.4 / Block IP range 203.29.131.*