One of the little games that came with Mandrake 9 is Trophy: a little 2D car racing game. It’s been keeping me amused for the last week or so. It’s still fairly fresh and raw. Things that I suppose I take for granted with other little games like being able to configure the keyboard keys and a record of high-scores aren’t yet implemented. Ocassionally it folds up and disappears too. But sticking guns on cars and racing them – that’s always gonna get me in. The website also has a d/load of a manual for building new tracks. 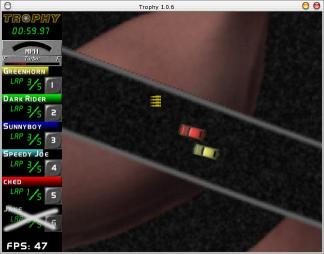 Speaking of apps, since the terrible changeover scenario where I lost everything, I’ve just recently got back around to grabbing Gtk-Gnutella again for all my file-schnaffling needs. It must’ve jumped up a version since last when I was using it — I don’t know what those gnutella people are on, but, cut the dose! — the thing is drowning in dials and whirring bits and all manner of incomprehesible readouts. i don’t know how much of it is neccesary – very little of it to me, that’s for sure. It’s another of those Linux apps that sorely needs to include a nice looking, HTML-laid-out info file with the package download – to give the user an idea of what all these things are for. A FAQ on the homepage and a mailing list are good things, but it wouldn’t take much effort to compile the kind of thing I’m talking about.

“sure it’s controversial, but I’m not Prince”
I refer thee back to this short schmeditorial I did on codeweaver’s plugin crack searchers, which got a snarky little comment the other day, and for the first time, Spouting had to defend its line. Odd indeed for me to be saying, ‘you got to respect people’s right to make money from software if they want’, but there ya go. It’s true. And there’s no such thing as an undying opinion.
Just until recently I thought all real estate agents/property developers were evil, evil people. Certianly not just some, and more like most but probably all. And then I got to know a guy who does that and he’s a really decent person and doesn’t rip anyone off. (I’m still going to write a short story about a homocidal real-estate man though).

Borrowed that Sven Vath album from the library, and am a tad surprised about how many of the sounds also pop up in Speedy J tracks from a couple of years ago- the ‘G-spot’ album. Kind of makes me wonder who was doing the borrowing – Sven or Joachim. Got a good tempo to it.
Also borrowed Jonathan Richman’s ‘surrender to jonathan’, which has got that classic, “I was dancing in the lesbian bar” on it.